BMI calculator
Coupons
Disclosure
DeliveryRank contains reviews that were written by our experts and follow the strict reviewing standards, including ethical standards, that we have adopted. Such standards require that each review will be based on an independent, honest and professional examination of the reviewer. That being said, we may earn a commission when a user completes an action using our links, which will however not affect the review but might affect the rankings. The latter are determined on the basis of customer satisfaction of previous sales and compensation received.
Latest Articles
The 3 Best Frozen Meal Delivery Services (Updated for 2022)
Best Senior Meal Delivery Services of 2022
Blue Apron vs Sunbasket: Which One Should You Choose? 2022 Update
Best High Protein Meal Delivery Services of 2022

All Y’alls Foods 2021: Jerky with a Difference

Brett Christoffel, Founder and CEO of All Y'alls Foods describes his journey from avid carnivore to vegan and setting up a plant-based snack company in Texas, USA. 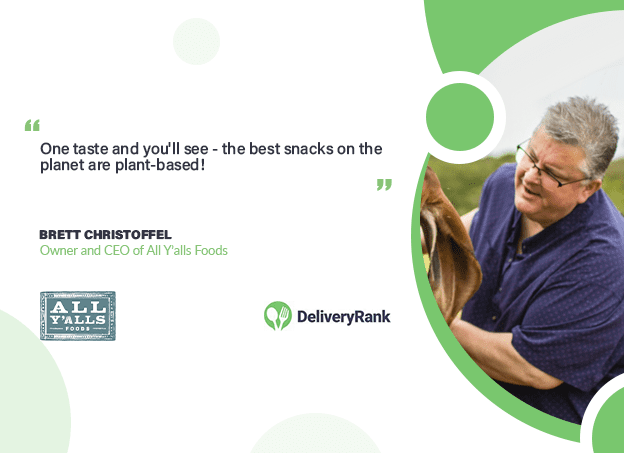 What was your motivation for launching All Y’alls Foods?

About ten years ago, I read the books: One Minute Cure and Medical Miracle. After reading them, I realized that everything I thought I knew about health, nutrition, treatment, disease, cures, and healing was inaccurate.

I attended the Institute for Integrative Nutrition and then opened a raw, organic, vegan juice and smoothie bar. Bearing in mind that I ate dairy and meat every day, I still knew that the most healing and nourishing fuel for our bodies was raw, vegan food.

I published a book called Nutritional Truths where I wrote about large wild animals such as the rhinoceros and elephant, which lived on a simple diet of grass and plants. On a visit to the zoo with my wife, about five years ago, it hit me: all animals are sentient beings and don’t want to die. I’ve never eaten meat since. I then went vegan three years ago.

I learned that beef is Texas’ second largest export after cotton, and loving cows as much as I love all animals, this upset me deeply. So I decided to do something about it and created All Y’alls Foods. There are seven regions in Texas, and I came up with a jerky flavor for each, three of which were first launched in 2018.

Based in predominantly beef-eating Texas, did your products gain instant popularity?

We first launched at a Go Texan event. A lot of people there were unfamiliar with the term “plant-based,” so I did my best to enlighten them. Burger King then launched a plant-based burger, so people were starting to become more aware of it. 90% of all consumers who buy plant-based meat substitutes still eat meat and dairy, but they’re plant-curious or trying to eat more plant-based food for health or sustainability reasons.

We offer a new twist on traditional Texas proteins by offering products similar to the animal counterpart, while nourishing the consumer. In addition, we use approximately 1/13th of the resources that other companies use in creating animal-based snacks. 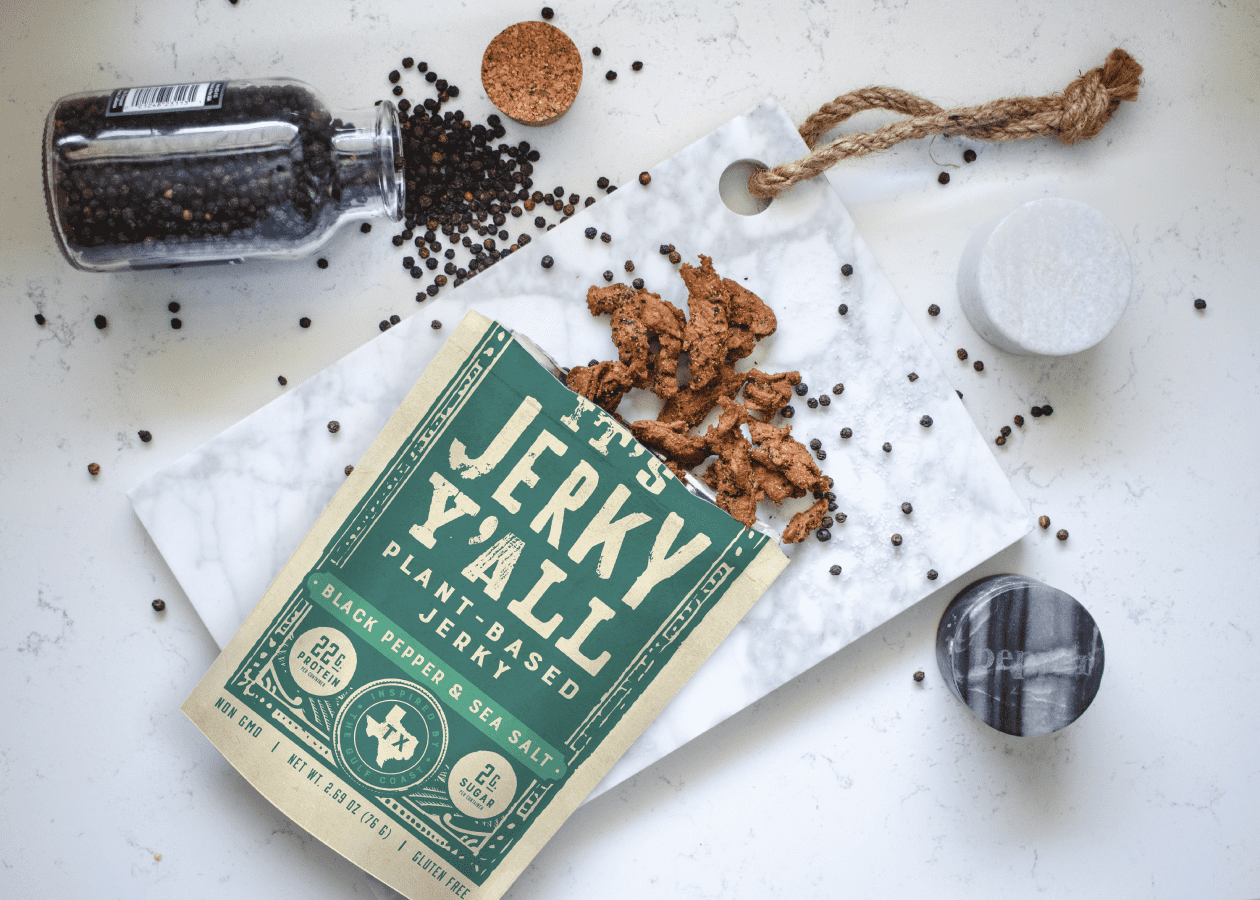 Which of your products are the most popular?

I would say our Bacony Bits, which were launched a year ago and became the number one meatless bacon on Amazon in February. Right behind those is the Black Pepper & Sea Salt Jerky, then Teriyaki and Chipotle flavors. The Bacony Bits are great as simple snacks, eaten in a BLT, or can be sprinkled on salads, potatoes, or pizzas.

Our jerky is a protein replacement. It actually has more protein, calcium, magnesium, and iron than beef. It also has no cholesterol and is NOT rated a class one or two carcinogen. 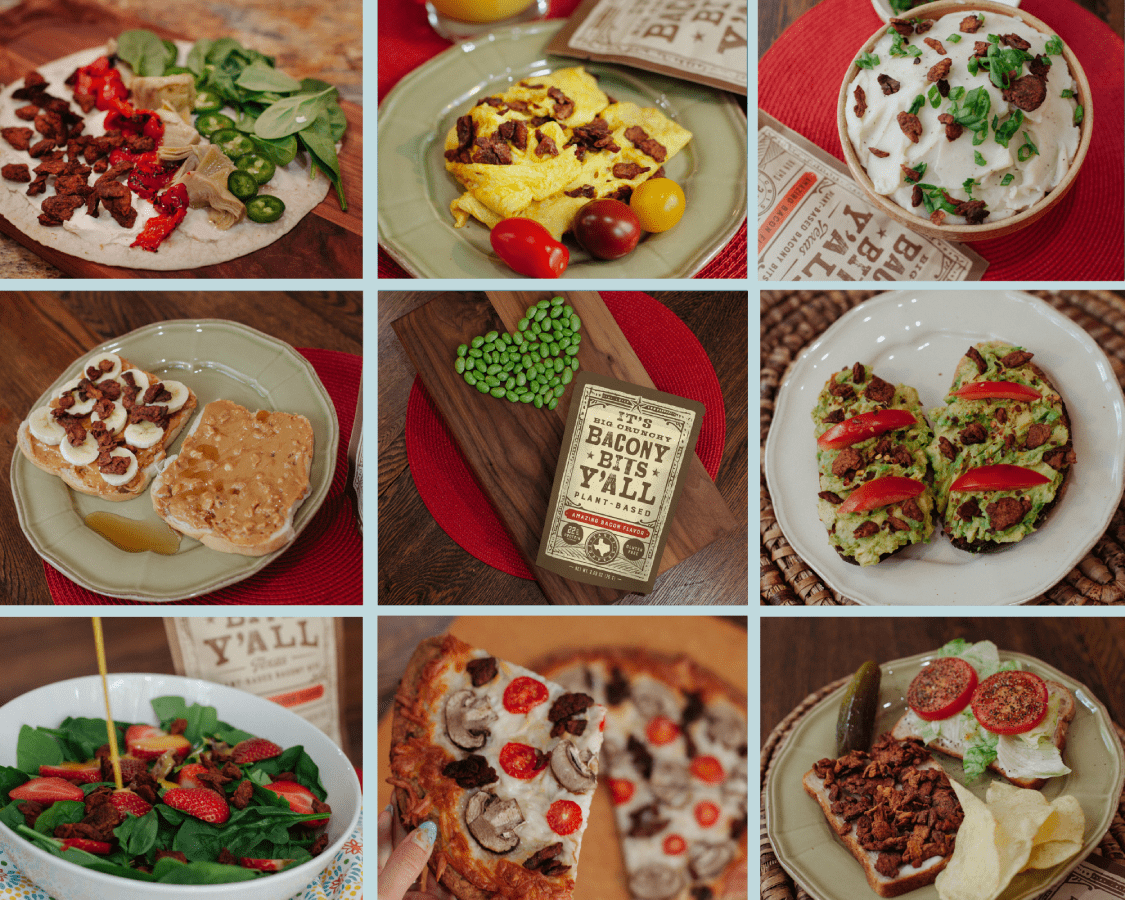 Where do you source your ingredients and are they organic?

Our products are all non-GMO, but not all organic. Our jerky is a certified no-spray crop and most of our ingredients are sourced in the USA, but a couple of things may come from India or other countries.

Tell us about Bubba-Loo and Splatter.

I was looking for the largest herd of cattle in a sanctuary and came across the Rowdy Girl Sanctuary located here in Texas. Bubba-Loo was part of the original herd and sadly died a few days ago just under the age of twenty. Splatter is Angus and came in with the original herd. She’s never been tagged, bought, or sold, and will spend the rest of her life just hanging out with her fellow moos.

In addition to their wonderful work with cows, Rowdy Girl Sanctuary also assists farmers in finding ways to subsidize their income through veganic farming. Veganic farming removes animal parts completely from the process, whereas organic farming may use blood, bones, and other animal parts as fertilizer.

Where do you see yourself and your company in the near future?

We currently ship nationwide throughout the US but will be going international at some stage in the future. We have plans to become a much larger company than we are today. We’re so excited to present foods that people will enjoy and that will nourish and satisfy them, while taking care of animals and the earth.

On average, one hundred thousand animals are killed in the world every minute of every day. If we killed humans at the same rate, we would be extinct in 18 days. I’m not blaming others, as I said earlier, I used to be the same.

I do think, however, that people are starting to see the need to change. Economically speaking, plant-based meat replacement products represent a seven-billion-dollar industry, and it’ll be seventy-five billion in the next five years. Views are shifting. I’m confident there’ll come a time when people look back and ask “did we really eat animals?” and it’ll seem so bizarre. It may take time, but it’ll happen.

A wannabe global ‘food-trotter,’ Sarah nurtures a deep-seated passion for food and cultural diversity and believes the two go hand in hand. Having lived in Europe for many years she has a great knowledge of Mediterranean and French cuisine. She now lives in Cape Town, the food capital of Africa. When she is not dining out or cooking up a storm you will find her kite-surfing on the ocean, up a mountain, or cuddling her cat Samson!
Our Top Pick for August