Crover provides autonomous bulk storage management solutions that aim to reduce grain loss during long-term storage by mapping conditions inside grain bulks. In this interview, Founder and Managing Director Lorenzo Conti discusses the unique technology behind the world’s first subterranean drone and its potential impact on the future of food. 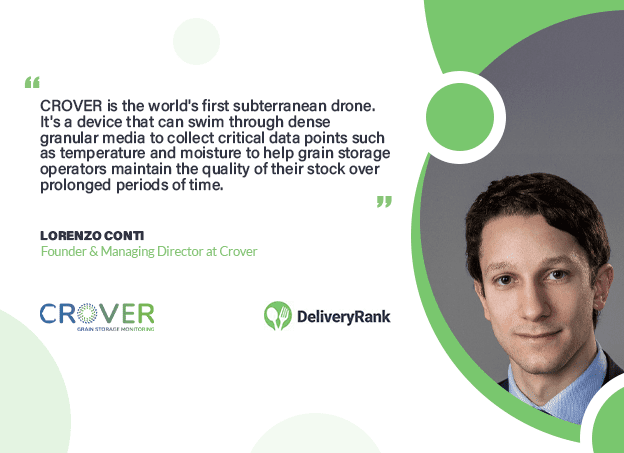 How did the idea of Crover come about and how did it develop?

It's been a much longer journey so far than I originally envisioned. The idea started when I was completing my Ph.D. in granular materials at the University of Edinburgh. There I discovered a physical effect that we like to call the “Crover effect”, which makes it possible to move through granular environments, from sand dunes to chemical powders and mineral bulks.

We filed various international patents on the core technology and that honor has already been granted in the UK. We used it to develop the world's first subterranean drone, or a CROVER, as we call it, a device that can swim through dense granular media.

From a commercial point of view, we've been focused on building a grain storage management system around the CROVER to help grain storage operators maintain the quality of their stock over prolonged periods of time.

At the moment, CROVER can map temperature, moisture, and stock levels. We're working on adding more sensing capabilities. As it moves through the grains, it also helps maintain the quality by mixing the grain. This is because it keeps the grain aerated and prevents problems like crusting on the surface and product degradation in general.

What kind of challenges does the CROVER solve for its users?

Right now we're focused on companies that have centralized storage hubs. Those places usually have 20,000 tonnes of storage capacity or more, in some cases, the local farmers bring their produce. This is the kind of place that’s usually owned by grain merchants and cooperatives. We recently started working with such players in the UK and Italy as part of our pilot projects.

The way grain storage management is done at the moment often requires a person to physically walk on top of the grain bulks, which is very tiring, time-consuming, and not very safe. If you sink in a grain bulk, there's nothing that can save you. For businesses that want to improve the health and safety of their operations by stopping people from having to take that risk, that's a big thing.

One key part of it is enabling accurate Integrated Pest Management (IPM) practices, which means keeping an accurate view of the condition of the grains, primarily temperature and moisture, and controlling those two parameters to keep them within safe thresholds. If you can keep the temperature and moisture within the limits, pests wouldn’t be able to grow so you can technically store your grain indefinitely.

The challenge is that accurate IPM requires data points for every half meter and no system so far has been able to provide anything close to that. Until now, if you wanted to apply IPM, the risk was higher than the potential benefits.

Then there's the other side of enabling the owner to act on their grain and take business decisions at the right time. This could be cooling, aerating or turning the grain over, or even just selling it at the best time to maximize the outputs.

We have a web-based platform that you can access from any browser or internet-connected device. It visualizes 3D maps of conditions within a grain bulk. You can also see a graph of how the medium, maximum, and averages are changing over time, as well as weekly summaries per site if you have more than one site.

Traceability is a big issue right now across the food supply chain and it's something that we're looking more and more into. I think that's going to be one of the next steps, linking with the rest of the supply chain. It’s a way for them to manage their assets, knowing how much they’ve got and what quality, and where they can move around.

Right now, our big focus is on getting the first version of the CROVER ready commercially for the summer, which is the next cycle of harvest.

In the short-medium term, our goal is to bring grain storage operators to know the quality of their stock and also to improve the health and safety of their operations. That's a big thing that we keep seeing more and more.

I think it's really exciting to see how groundbreaking technologies like ours can be applied to agriculture as a starting point before expanding to other, highly attractive areas like space. I think that's partly driven by the fact that we all need food to survive. It’s a bare essential. It doesn't suffer from some of the sharp market changes that we’ve seen during the pandemic. If we want to improve the environmental and social outlook of the world, agriculture is the place to start.