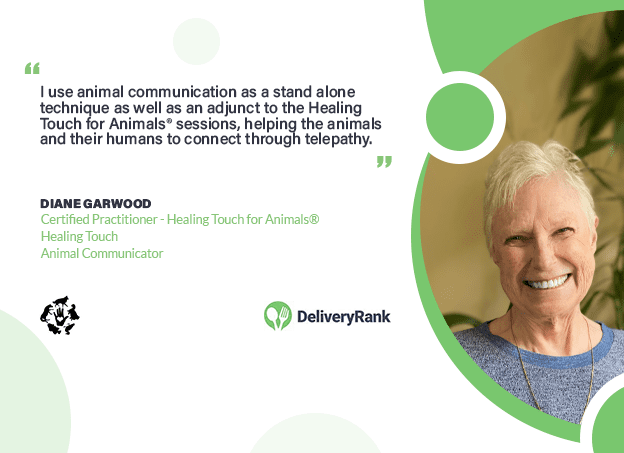 How did your journey bring you to be a practitioner of Healing Touch for Animals® (HTA)?

About twenty years ago I started becoming involved in Animal Communication which I did for several years. My husband passed away in 2007 from kidney and liver failure and about a year after that my heart dog came down with liver failure, a very rare disease and usually only found in small dogs.

The vets had tried everything and were suggesting euthanization as they felt there was nothing left they could do. I knew my dog was not ready to go even though he had lost all his fur and was extremely thin – his soul was not ready to go.

At this time I was working with my mentor in Animal Communication, and one day she said to me that I needed to clear my energies. I went for a Healing Touch® session even though I was somewhat skeptical. I didn’t mention my sick dog. A couple of days after that session I could see that my dog was starting to heal. He started eating again by himself and his pee turned from almost black to completely clear. A few weeks after that his fur started to grow back and I could see he was going from strength to strength. His liver numbers were improving and he gained weight. Within six months you couldn’t see that he’d been sick at all.

During this time, I’d continued to do Healing Touch® sessions. The lady I saw suggested I learn to practice Healing Touch® myself. I wasn’t interested in working on humans and brushed the idea aside. She sent me the email on the course anyway and I left it in my inbox unread.

To cut a long story short, something made me open the email and sign up for the course and I found myself attending several sessions of Healing Touch for Humans® and then I took Healing Touch for Animals®. I was hooked and took all of the five classes available, and became a Certified Practitioner. This changed my whole life. I work on animals and people and I LOVE what I do.

Would you describe HTA® as a similar energy healing modality to Reiki?

I always say that it’s like Reiki on steroids. Generally speaking, it’s very similar to Reiki as it’s a heart-centered, unconditional love kind of energy healing – we’re asking the unconditional love of the Universe to come in and heal.

What exactly can you expect to see in your animal after a successful session(s) of Healing Touch®?

It actually depends on what the initial session is for. Healing Touch® and Healing Touch for Animals® helps to put out the “fire” that’s going on within the body. If the body’s out of balance, things are going wrong, or a disease is setting in, the body is out of homeostasis (or balance) and is often unable to take care of the issue. My goal is to bring the body back into energetic balance and back to homeostasis to quiet the “fire” or put it out altogether, on its own. The body can then self-regulate, and stay in homeostasis, much more easily.

I also work with elderly animals or animals that are ill and nearing the end of their life and I employ euthanasia techniques to help the animal cross over peacefully. I believe that if something’s not taken care of in this life, it will be carried over to whatever is that soul’s next journey. My goal is to clear the body energetically of any issues of this life so as not to be carried over. The lesson has been learned, whatever that may be.

Do you apply the same techniques to all animals, regardless of species, age, breed etc?

Yes. It could be a fish, a snake, a tree or a human. We all have the same chakra systems and Hara line which grounds us. We’re all energetic beings therefore the same Healing Touch for Animal® techniques can be used on all beings.

How much of the healing process involves the owner of the animal?

It doesn’t matter if the owner believes in energy or not. Whether you believe in it or not, the physics is there. I go in and get the job done regardless of the belief or non-belief systems of the person involved.

What signs should you look out for (as an owner) to initiate HTA® treatment or is this something that can be performed at any time?

Just FYI, my dog lived another six years after his liver failure incident that I mentioned earlier. When he died of old age, his liver was completely healed. True story!