Dokkaebier is a California-based brewery that produces experimental beers, using ingredients like bamboo and kimchi. In this interview, CEO Youngwon Lee discusses the process of introducing new flavors to the market and invites beer fans to give it a try 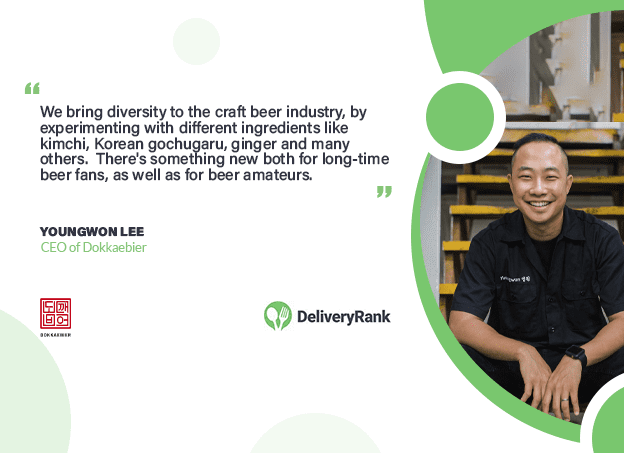 How did you come up with the idea for Dokkaebier?

I’ve been involved in the alcohol industry for 14 years. Back in South Korea, I ran an import distribution company representing many international alcohol brands. My main goal was to launch them in South Korea.

Things took a turn five years ago when an opportunity to live in the U.S. arose. I started running a brewery in northern California. Three years ago, I started Dokkaebier, an Asian-inspired craft brewery based in the San Francisco Bay Area.

We use many Asian ingredients to create new types of craft. One of our flagship beers is the Bamboo Pilsner. We add bamboo leaves to the pilsner for extra tea flavor. We also use yuza in our blonde ale to add a very fragrant and aromatic flavor.

But our most famous beer might be our Kimchi Sour. Kimchi is one of the most popular and recognized Korean foods, so we knew we had to use it for our beers. We incorporate lactobacillus from homemade kimchi, Korean gochugaru (chili) and ginger. It’s refreshing, but it's not spicy. You get a hint of ginger and pepper in your taste buds.

In short, we bring diversity to the craft beer industry as we experiment with different beers and ingredients. It’s our way of making a difference. We think there’s something new for everyone whether you’re new to craft beer or a long-time fan.

Are your recipes based on tradition, or do you experiment with different South Korean staples?

Believe it or not, there’s no such thing as a Korean beer. We want to create something that people can recognize as Korean beer, which is why we incorporate a lot of Asian ingredients.

Beer is beer. Lager is lager. Craft beer is just different beer, as there's no such thing as a traditional craft beer recipe.

Which flavors are the most popular among your customers?

Kimchi Sour, Bamboo Pilsner and Yuza Blonde are the most popular Dokkaebier craft beers. They have also won national and international awards. Kimchi Sour won a Gold Medal at the 2021 Annual BrewskiTM Awards.

We also have Milk Stout, which is a sweet dark beer made with cardamom and peppercorn. The milk stout was the Best Sweet Stout in the 2022 World Beer Championships and won a Silver Medal.

Every month, we come up with a new flavor and combination. We have used Indian black tea, Thai ginger, lemongrass, Szechuan peppercorn, and even quinoa. Our newest beers are made with tamarind and passion fruit, wild strawberry and rhubarb, and magnolia berry and chili.

I noticed a White Can Label on your website. What is it?

The white label stands for our experimental brews.The experimental craft beers are made in small artisanal batches and are available as limited-time releases.

We enjoy being creative and experimenting with new flavors. In less than two years, we’ve already created about 30 original craft beers.

When we create a new beer with original ingredients, we want the feedback and approval of our customers. It’s like having an outlet for experimental products. We try different combinations and invite our community to be part of the process. We then incorporate the feedback before adding the beer to our official lineup for year-round availability.

Do your ingredients need some sort of approval?

We are craft beer fans, and we want to get feedback from craft beer fans right away. We organize many tastings and make sure to have them test our experimental brews.

We analyze reactions, feedback and customer suggestions. The approval of our community helps us understand whether the new creation is a good bet.

And who are your typical customers? Do you work mostly with businesses or individuals?

There’s something for everyone with Dokkaebier. You don’t have to be a craft beer nerd to enjoy our beers.

Dokkaebier is also available at Whole Foods Market, BevMo!, Total Wine & More, Craft Beer Kings and other local bottle shops, grocers, liquor stores and restaurants in California. We're expanding both the availability of new types of beer and where they can be purchased.

What is one thing that helped you in your entrepreneurial journey that you would do over and over again?

I think some people are scared to do something innovative, but it’s exciting for me. I am not the type to sit behind a desk.I am outgoing and unafraid to make things happen, even when it requires hours of research

I am also open to feedback. Many entrepreneurs can’t take criticism of their business idea, but I think it’s important to make yourself vulnerable. I may be able to make a change. It’s part of the reason we create experimental beers and host so many tastings. We crave frequent, authentic feedback from our customers. It helps us confirm we're making progress and determine whether we are on the right track.

There aren’t many experimental beers out there, so I know we’re doing something pretty unique

Is there anything else you'd like to add? Highlight something we don't know yet?

Dokkaebier is a craft brewery and a startup. We're always working on new products and looking for new flavors. The range of ingredients, varieties and beer styles is endless.

New flavors and styles are available only for a limited time. Once they are popular, we refine the recipe and produce them again.

Many of our craft beers are inspired by Asian culture and cuisine. Sometimes, we even get inspired by movies. The movie “Minari,” literally means water celery, and depicts the life of a Korean immigrant to the U.S. Being a Korean immigrant myself, “Minari”rang a bell and led me to create a new craft beer with water celery. I’m proud the movie won a Golden Globes award, and the Minari Witbier sold out in weeks.

Another pop culture inspiration is the Netflix drama “Squid Game.” In the show, characters consume dalgona, a traditional candy we ate in Korea as kids. It’s a Korean junk food we used to eat in front of school. I wanted to flavor a beer with the candy, so we made it one of our limited-edition experimental beers.

We have fun and recognize inspiration can come from anywhere. Asian Americans make up a tiny 2% of the craft beer industry, so we’re glad we can be funky and different and represent our culture.