We meet with Jessica Taige, Founder and CEO of Jessie’s-Nutty-Cups, to discuss her “stairway to peanut butter and chocolate heaven.” Based in Brooklyn, NYC, Jessica handcrafts gourmet peanut butter cups in a variety of mouth-watering flavors and distributes them nationwide. 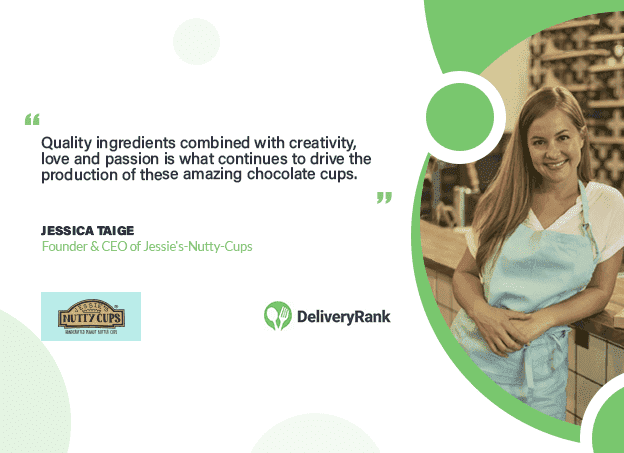 Tell us – as a little girl were you always baking cookies and goodies?

Baking was never “my thing” and when I do bake, I’m always glued to a recipe. That's part of why I like making peanut butter cups so much because there’s no baking involved. Baking is a science and I’m reassured by the fact that my cups cannot flop.

Did serendipity play a role in the creation of Jessie’s-Nutty-Cups or was this a goal you’d been working toward?

My mother and I came to the States from Germany when I was 6 years old and I decided then that I was going to be an actress and be on Broadway. About 10 years ago, I moved to New York to pursue that dream. I had many auditions but nothing ever materialized.

In 2014, I was serving in a restaurant and my roommate was offered a big theatre job elsewhere. He had a farewell party and I made peanut butter cups from a random recipe I found. I thought they were good, but that I could do better. It all started there. I never considered taking it further until people started telling me I should sell them.

So yes, serendipity certainly did play a role.

When did you launch your company?

I have no regrets about how my life has turned out. With your own business, if you put the work in, you get results. With acting, you can do all the right work and be super-talented but if you’re not in the right place at the right time, it can all be in vain. It’s very subjective.

I was still working in restaurants when I launched the business but as Jessie’s-Nutty-Cups grew, I realized I had to work full-time. Initially, I ran the company on my own, then three years ago I hired occasional help, and two years ago I got regular help. I had a baby six months ago, so now I have one full-time employee who focuses on production and I’m currently sourcing another full-timer to focus on shipping management.

Your cups are available in a number of stores nationwide. What other services do you provide?

We wholesale our nutty cups in 2-packs to retailers all over the US. With chocolate, shipping worldwide can be challenging for obvious reasons. We also have a website and sell delicious gift boxes and subscriptions through Cratejoy. 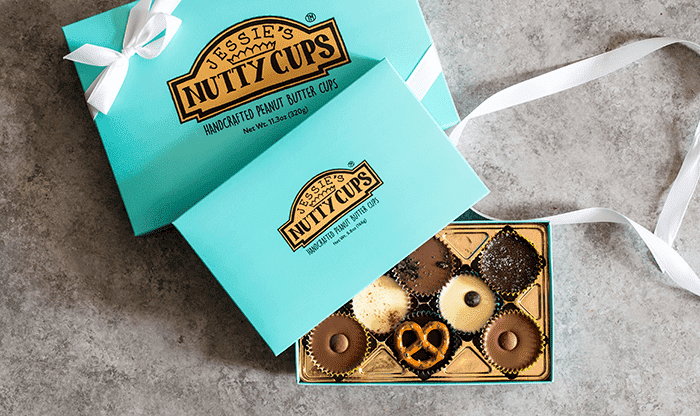 When you started, did you ever think you would be this successful?

No. In fact with every milestone, you take a step back and say, “Wow! Have I really just achieved that?”

Starting a business can be very lonely. It definitely helps to surround yourself with other entrepreneurs to bounce ideas off each other and to constantly remind yourself you’re not alone.

How do you find inspiration for new flavors?

We have seasonal flavors, some of which are brought out time and time again – for example, our Honey Cup, which people were going nuts about. Otherwise, it’s pretty much trial and error. We usually bring out a new flavor every three or four months.

How do your peanut butter cups compare to Reese’s, or is that a question that should be avoided?

We all know Reese’s Peanut Butter Cups. People always say to me, “You’re like Reese’s!” and I always reply, “Yes! But way better!” We make everything fresh and by hand and we roast our peanuts and grind them down. We only use Belgian chocolate and we also use a lot less sugar, so you can better taste the ingredients.

Our shelf-life is much shorter than a commercially made chocolate. When you buy your Nutty Cups, they’ll only be one week old (maximum two) so the peanut butter will still be soft and gooey.

Your nutty cups look absolutely phenomenal. Have you had any formal training?

When I started I was only melting the chocolate instead of tempering it, so any cups not in the fridge melted very quickly. I did sign up for a couple of chocolate courses but they were all canceled due to lack of interest or other reasons. So I'm a self-taught YouTube chocolatier!

I took two entrepreneurship classes right at the beginning but other than that I’m completely self-taught. I’ve had to learn as I go along.

Are there any exciting plans for the business in the near future?

Keep spreading those Nutty smiles as far as we can!

I do have a distant dream of having a little Nutty shop, perhaps a chocolate shop/cafe/wine bar – but somewhere outside of New York as the cost of living here is way too high.

Would you consider “crossing the Pond”?

Shipping chocolate is a tricky business. My first huge order was from Japan and we made it happen! I even saw Instagram posts from Japan. However, I followed up six months later with the person who made the order for all the retailers and he said there had been a few issues with chocolate melting.

On our side, we took all the necessary steps to ensure that that would not happen, so I have no idea what went wrong. It was completely out of my control.

Is life worth living without chocolate and peanut butter?