The J.Q. Dickinson family “salt saga” began over 200 years ago in Malden, West Virginia, with the founding of a salt production business (J.Q. Dickinson Salt-Works).

Over recent years, as the family business was revived and the brand grew, other highly skilled artisans in Appalachia were drawn together to form J.Q. Dickinson Appalachian Mercantile, which is a “wonderful homage to the beautifully created commodities of bygone centuries.” We chat with Nancy P. Bruns, CEO and Co-Founder of J.Q. Dickinson Salt-Works /Appalachian Mercantile, to find out more. 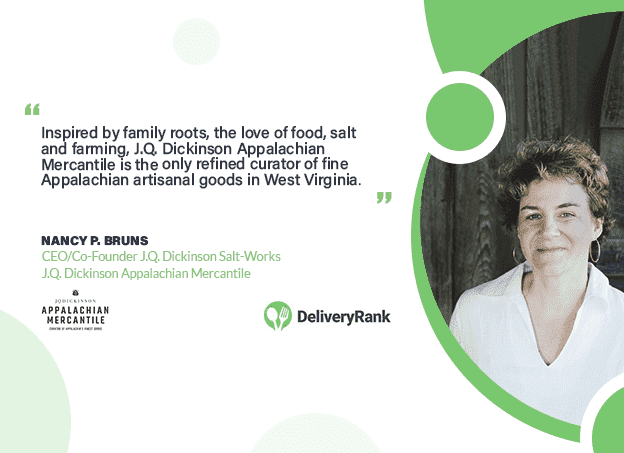 Tell us about your family’s roots and how they first came to farm salt 200 years ago.

In 1813, my family moved to the Kanawha Valley, West Virginia, where they bought land. They had heard of plentiful salt resources in this area. They spent the first two years cutting down trees so they were able to boil the brine, a further two years digging a well, and by 1817 they were producing salt.

The land is located on top of the ancient Iapetus Ocean, which is a 400-600 million-year-old source and runs under the valley like a salty river. The source was first discovered because the salty underwater aquifer was pushing up in springs and attracting large animals (buffalo, deer, and elk), which brought Native Americans to the area.

European settlers were moving further inland across the mountains at this time, and they too discovered the valuable source.

Did you and your brother grow up salt farming or did you decide to rekindle the family business (J.Q. Dickinson Salt-Works)? If the latter, what inspired this decision?

Our family stopped producing salt in 1945, so we didn’t have much knowledge of salt farming. We owned a family farm but there was no salt production. It was only much later that I took an interest in the family history and started seeing it as a business opportunity.

My early career was centered around the food industry in the form of restaurants and catering. I became a chef in my early years and it was at this time that salt started to fascinate me (its minerality, crystal formation, and taste) and that’s where it all began!

Do you still farm salt in the traditional way your forefathers once did?

We consider our salt an agricultural product and refer to our land as a salt farm. Our ancestors functioned on more of an industrial scale. They had big salt furnaces and would boil down brine and burn timber (and then coal) to produce thousands of pounds of salt a day. We might get to 18 000 pounds this year, which sounds like a lot, but it’s not in the big scheme of things.

We draw the brine out of our well, then place it in sun houses and solar-evaporate it. The whole process takes about 6 weeks from the time it is brought from the well and put into a jar.

How do traditional salt-farming methods differ from modern-day techniques?

The type of salt farming used really depends on the climate. For example, Maldon in England uses gas. Others boil brine. There are salt pans on the French and Italian coasts where the beach and coastline are instrumental in the manufacturing process. The tides move seawater through the pans and the sun is used to produce the salt.

What impact does traditional salt-farming have on the environment versus the more commercial approach?

We have a very low environmental impact as we have only one well to draw the brine and we use solar energy. We’ve recently installed solar panels to cover all our electrical needs. No electricity is needed to produce our salt and we are entirely at the mercy of Mother Nature. Mining obviously carries a much higher carbon footprint.

In your opinion, do most people take salt and its history for granted?

Yes, most certainly! Salt is so readily available wherever you go that most people don’t give it much thought. Nowadays, we’re not as concerned about preserving food as we were before refrigeration.

Back in the day, people lived off the land and if they were lucky enough to have salt they could survive the winter. They’d harvest their food, pickle or ferment it, make dried and salt-cured fish and meats – all of which required salt. One could not survive the winter without salt.

Over recent years, salt has carried quite a stigma when it comes to health issues. What are the health benefits of J.Q. Dickinson unrefined salt?

A few years ago, salt was believed to raise blood pressure but more recent research has shown that fewer people have high blood pressure related to sodium content.

We believe the natural minerals in salt are of value to maintaining a healthy diet. Morton Salt, for example, purifies the salt, extracts the minerals, and adds anti-caking agents before packaging.

J.Q.Dickinson salt contains natural minerals as well as sodium chlorides, which means it is significantly lower in sodium and much more flavourful than Morton salts, for example, so you end up using a lot less. It’s a win-win situation.

Does the “terroir” (the characteristic taste based on the natural environment) have an effect on the quality of salt produced?

Definitely. Depending on where you are in the world, the natural minerals found in the brine vary tremendously and therefore lend to a difference in flavor.

Salt tastings do exist and a while back, Kanawha salt won the best salt in the world at the World’s Fair at The Crystal Palace, London. We don't know if it was the salt from our property, but it was definitely from our micro-region.

Question from a salt novice: do bath salts differ from table/cooking salts?

It’s a good question. Some bath salts are Epsom salts, which are potassium chloride as opposed to sodium chloride and sometimes bath salts can be magnesium chloride. We sell our regular salt for both. We only produce our salt one way and then work with different local cosmetic companies and soap producers.

What inspired you to launch J.Q. Dickinson Appalachian Mercantile? Could you tell us about the products and services available?

We revived the salt business in 2013 and as it grew we started to make contacts with companies that wanted to use our salts in their products – food as well as bath products.

It occurred to me that many of these small companies were struggling to make themselves known in the world. As we built our infrastructure, it was a way for us to curate these products and then sell them under one brand: the Appalachian Mercantile.

We retail and wholesale these local and authentic products. We have a website as well as curating a monthly subscription box containing six or seven quality products, which we send to our subscribers. It’s a great way to get food, home goods, and crafts all over the world. We make sure the produce is locally sourced, high-quality, and, for the most part, organic.

What exciting ventures lie ahead for J.Q. Dickinson Appalachian Mercantile?

We are continuing to expand our list of ingredients, products, and makers. We are preparing for the holidays, of course, and I’ve curated a high-end luxury box of items not available elsewhere: a combination of pottery, wood products, food, and home goods. We’re very excited to tap into a new market niche.

As we develop the wholesale side of our business, we can create a one-stop-shop for retailers who want to carry our authentic Appalachian products. We’re currently getting substantial interest from overseas, especially in Europe. So, let’s see what the future holds. 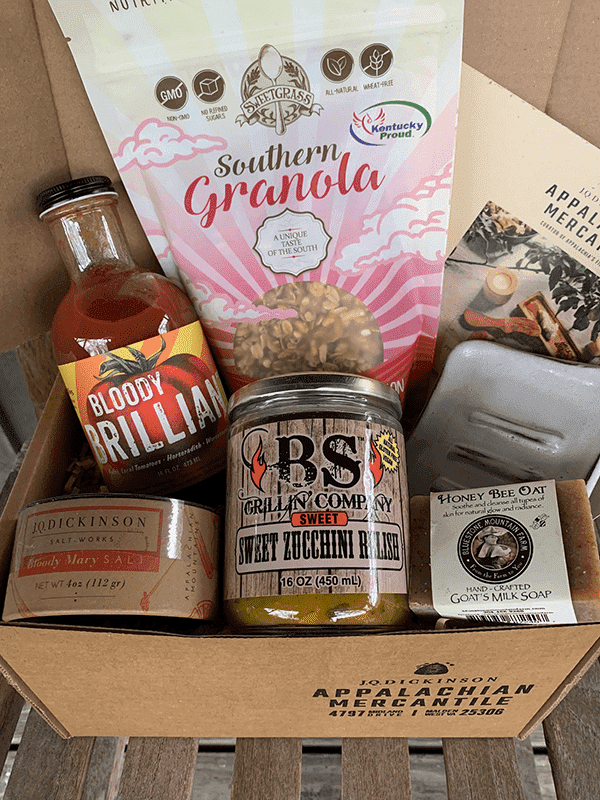