Keen One Foods produces Heat and Eat Quinoa cups using sustainable, fair trade organic quinoa to benefit cooperatives in the Highlands of the Andes Mountains. In this interview, founder Christopher Algea shares his entrepreneurial journey and his strong passion for quinoa. 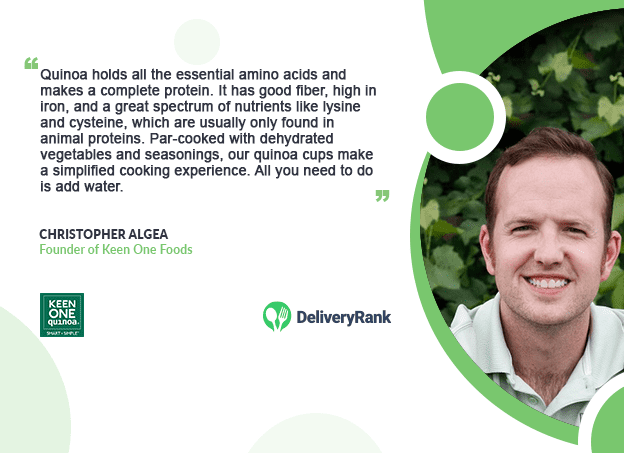 What’s the inspiration behind Keen One Foods, and how has it evolved over the years?

I started Keen One Foods while doing my undergraduate degree at the University of Colorado in Boulder. I was in a new product development marketing class while working at a restaurant that featured a lot of South American cuisine, and quinoa was one of the most unique ingredients on the menu.

I'm originally from Tennessee where ethnic cuisine rarely exists, so I was always fascinated by it. I was cooking up ramen noodles before going to a team meeting where we were supposed to come up with an idea and create a business plan. I was thinking about how to make ramen healthier and more nutritious using quinoa in a simple, quick, one-step kit.

I pitched the idea to the class and everyone loved it. So we brought it to market, did some test samples, and got a B. Everybody went on with their lives but the idea stuck with me and I had another semester to go.

After graduation, I kept tinkering with it. I started looking at the logistics of par cooking quinoa and then doing some tests with the community in a farmer's market in Boulder. While looking into the operational feasibility, I found a location about 20 miles away in Longmont that had a commissary kitchen being built, that would be able to par-cook the quinoa and then run it through a rotary baking oven that could dry the quinoa.

From 2007 to early 2009 we started making and bringing to market pouches of par-cooked organic quinoa in three different flavors: Original, which was our plain unseasoned quick-cooking quinoa, Garden Medley, a savory vegetable flavor which we still have today and Pollo Picante, which had chicken powder and different spices. The latter has evolved into Chipotle, which is more customer-friendly as well as vegetarian.

In 2009, we started selling at local farmers' markets and then at Whole Foods and other independent stores. There was a lot of learning in those first few years. Par cooking the quinoa was labor-intensive, and since I was still working full-time, I found myself working around the clock which was exhausting.

In 2011, I was ready to hang it up because it didn't seem feasible to scale with the process we had in place. I took an all-or-nothing trip down to Bolivia with the hope and a prayer that if this was my calling in life, there must be somebody out there that could make this unique quinoa and allow us to just import the finished par-cooked quinoa. That way we could focus on manufacturing, sales, and marketing.

After meeting with a few different processors around La Paz and El Alto, I met a guy who was doing it in the heart of quinoa country! We made an agreement and I ordered a metric ton of par-cooked quinoa. I was hoping to get it in two or three months, but it ended up taking six, so during that time I organized the business with an operating agreement and trademarks, brought in some investment, did some rebranding, and narrowed down the production line.

We continued to grow until 2014 when we did another rebranding to make the product pop, but it was still in pouch form. In 2015, when quinoa was rising in price, we saw the opportunity to leverage our supply chain and get into bulk food service.

We were bringing containers of 20 metric tons and the majority of that was whole seed quinoa that we could sell to restaurants and foodservice operators as an ingredient supplier, while also importing a few tons of our specialized par-cooked quinoa. That helped strengthen our company because it's a much larger volume for economics and a better flow for the supply chain.

We first launched our latest retail quinoa cups in late 2017. These cups are specifically designed for lunch and dinner-style meals. You just add boiling water and let it sit for about seven minutes, or microwave it for two and a half minutes to have a nice tasty meal.

What's so special about Quinoa?

Quinoa is often referred to as a pseudo-grain because it's in the chenopod family so technically it’s not a grain but a seed of a plant closely related to spinach and beets. It cooks a lot like rice so it has a nice soft texture and a little bit of crunch. It has a slightly nutty flavor that’s easily seasoned and can be used for anything from breakfast porridge to anything you would use rice or other grains with. You can throw it into salads and soups, so it’s very versatile. It’s also easy to blend in with rice or other grains.

Nutrition-wise, quinoa holds all the essential amino acids and makes a complete protein. It has good fiber, it’s high in iron, and has a great spectrum of nutrients like lysine and cysteine, which are usually found in high quantities only in meat or animal proteins. It’s highly nutritious, especially for people on a strict vegetarian or vegan diet.

We par-cook it with different dehydrated vegetables and seasonings and put it in a cup to give a simplified cooking experience. All you need to do is add some hot water.

How do you address the common misconception that heat and eat meals are unhealthy?

I think it's a fair notion that a lot of ready-to-eat meals aren’t healthy, especially in convenience stores or gas stations where it’s just noodles and a lot of sodium or even MSG, particularly in some of the Asian-inspired cups or bowls.

There’s been a change though, at least in the US market, where natural organic channels like Whole Foods have started introducing healthier products into this niche category. As with any relatively new product or format, there's a lot of customer education to be done, even with an ingredient like quinoa as the main ingredient. People are getting turned on to it every day, but it's still not the mainstream.

It's tough to fully change people's minds about what comes in a cup because they're used to macaroni and cheese or a cup of noodles which isn’t the healthiest. But when they see our ingredient list that’s very clean and certified organic, it reassures them. We try to put as much information on the cup as we can about healthy nutrition as well as through our website and social media channels.

Depending on where you're shopping, hopefully, you know what you're going to get. If you're at a natural store or somewhere that sources high-quality ingredients and products, you should feel good about what you're buying. The best thing to do is to just read the label and make sure it fits with your dietary needs.

Where can people purchase your products?

We’re set up online, so anybody can get our products on Amazon or through our e-commerce store keenonefoods.com. We have both our quick-cooking quinoa cups, and our bulk quinoa that we now sell directly to customers as well. Anybody who shops online can get it in a few days in a case of six cups. Our best seller is a variety pack so customers can try all the different flavors.

We also sell regionally in Colorado and the Midwest in grocery stores like Whole Foods, Kroger, King Soopers, Vitamin Cottage, Safeway, and HyVee. Additionally, we sell at many colleges and universities because we're trying to expand more to the younger demographic that likes that kind of convenience. We also see this demographic adopting plant-based and ethically-sourced ingredients.

Where do you see this industry going in the future?

The industry’s changed a lot in the last 12 years. Previously, traditional retail was increasingly open, especially Whole Foods, Safeway, and even Kroger wanting to champion local brands. But with Amazon buying Whole Foods, there's now a little more red tape. The distribution channels are mainly being held by very large players which makes it expensive to use their channels because of all the chargeback and promotional needs. Brands aren't necessarily making money on the margin as they should.

When you're a small brand that doesn't have millions of dollars of VC backing, it becomes very hard. That's why 90 plus percent of startups fail within the first couple of years.

That said, in the last three to four years, eCommerce has grown tremendously and a lot of brands are starting there and getting into the hundreds of thousands if not millions of dollars in sales before going into traditional brick and mortar retail.

I think that trend will continue in terms of people testing products for eCommerce and pulling stores to request products versus the brands continually knocking and going through category reviews, having to pay very expensive fees, and other promotional marketing trade spend to fund retailers. It's kind of a broken system.

In addition, a lot of retailers are spinning off their own private label brands. They're able to discount the sale because of their internal distribution channels, so you're competing with the same product at a fraction of the price.

E-Commerce is going to be where brands can test products and see if they work and hopefully build up a loyal base of consistent subscriptions or just a growing demographic in their niche, whether that's plant-based, organic, paleo, or others.

Trends come and go along with doctors' recommendations. I believe in a balanced, mostly plant-based diet where you can pronounce your ingredients. I think a lot of people do need some meat protein, especially athletes. It depends on what your daily routine is like and even your genetics, but ultimately, eating whole foods and decreasing the volume of meat consumption would make humanity healthier.

What does the future hold for Keen One Foods?

We’re looking at an acquisition or majority investment right now. We have quite a few very viable product line innovations in the works as well that we can make with our co-packer.

We had a challenging couple of years through the pandemic and it allowed me to restructure things a little bit and think about what's best for the company and myself in the long term.

For instance, we have a larger, multi-serve format for people that want to portion it out themselves or create custom mixtures. We also have breakfast and protein powder blends for using quinoa and other organic ingredients that I've come across in the last year to make up a larger portfolio of products.