Concert pianist and dog lover,Lisa Spector, creator of My Zen Pet, explains how she discovered and developed a method that teaches you how to identify sounds that calm the canine nervous system. 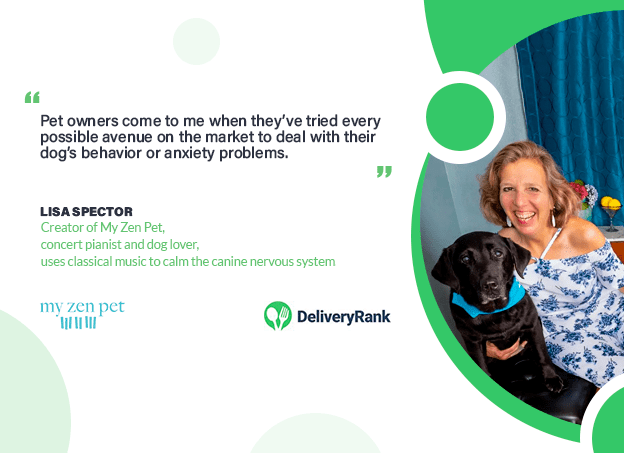 How did you get into this field? What have you experienced so far?

The best things in life seemingly happen by accident, but looking back, I think it was divine intervention. Back in 2003, almost 20 years ago, I owned a music school in my coastal town in California. Professionally, I was a musician, but I also had a huge passion for dogs.I was volunteering as a puppy raiser for Guide Dogs for the Blind, raising guide dogs in training.

At my music school, I was teaching a class of four-year-olds.I was interested in experimenting with different kinds of music to help my students stay calm and focused. I started researching different kinds of classical music. I played CD’s, as we did in those days, and found the right prescription of classical music effective in soothing four-year-olds. Then I looked over at my four-month-old rambunctious puppy from Guide Dogs for the Blind, and he was snoozing in no time. I thought if music can relieve children from anxiety, perhaps it can help dogs.That was the Eureka moment that started a new long-time career.

As a volunteer working in animal shelters, I realized that anxious dogs were not getting adopted. I wanted to do something to help get them adopted, which boils down to soothing their nervous system. When I co-founded my first company for pet stress in 2008, I created the Music in Shelters Program and was responsible for delivering that music to 1500 shelters nationwide. My experiment really increased adoption rates.

I'll never forget a call from a shelter manager who said: “Lisa, your Juilliard degree has paid off. Trello has been adopted after a year in the shelter”. This dog was so high strung and suffered from such anxiety that adoption prospects were limited. Hearing that my music got him adopted was really heartwarming!

What kind of music do you play for dogs?

When I began my journey in 2003, I came upon a research study by Irish behaviorist, Deborah Wells, that had been carried out in a San Francisco shelter. She tested a variety of sounds: human conversation, classical music, heavy metal music, pop music, and a control group without sound.

I was not surprised to find out that classical music stopped dogs from pacing and barking. I'm a classical musician. I've been playing piano since I was seven and all my dogs gravitated to the piano. Classical music is an enormously broad term. When pet people play classical music for their dogs but they're not educated in classical music, they might play the Berlioz Symphonie Fantastique, for a 140-member orchestra or Tschaikowsky's 1812 Overture.This music is so charged it will make the dogs more agitated.

I record classical music that is based on research to soothe and discharge the canine nervous system.This system has evolved over the years.

Currently, my work consists in curating the right prescription of classical music by making subtle changes that will soothe the canine nervous system. I might take a fortissimo section and play it soft, or an orchestral composition that's rearranged for piano. And I play it softly.

If you're driving and listening to a Beethoven symphony, and are simultaneously trying to have a conversation, notice how you're continuously changing the volume!. So, I curate the music to fit the prescription recommended to soothe dogs’ nerves.

You mentioned that you also use music to calm people…

My music is designed for both ends of the leash, because it is soothing. No matter how chill your dog is, if you stress, the dog feels this energy and gets nervous and stressed. So it's really helpful to appeal to both humans and canines and create music that is pleasant and desirable to both.

What kind of pet owners buy your services?

Pet owners come to me when they’ve tried every possible avenue on the market to deal with their dog’s behavior or anxiety problems. When all else fails, they say:”What the heck?  I'm going to try music. It can’t hurt.” In the end, they wish they’d come to me to begin with. It would have saved them a lot of money.

When my dog hides in the bathtub during a thunderstorm, I opt to play music.That's not a typical pet owner’s first response.There's no one-for-all solution that works for all dogs. But the music I've recorded has worked for about 90% of dogs.

In the USA, the 4th of July is a source of anxiety for pets and pet owners. Most dogs are sensitive and reactive to fireworks. It’s a canine sound phobic issue. Obviously, a dog will cower, shake and hide when it gets startled. Or perhaps it can get settled but its ears will be on alert.

Dogs try to identify the source emitting the sound and figure out if it is safe.They find relief in sound patterns.The scariest thing about fireworks is their unpredictability. The lack of patterns keeps dogs on edge. But once they identify a sound pattern, they feel safe and can settle. However, sometimes those sounds are very subtle.

When we talk to our dogs we instinctively lower our voice, which in musical terms is called a long legato sound.If your dog is about to cross the street and you see a truck coming, the last thing you're gonna do is lower your voice. Instead, you’ll go into a high pitch staccato short sound to get their attention right away. That's what I avoid as I curate my canine classical music.

Five years ago, after a fall, I fractured my right hand and was told I was never going to be able to  play piano again. So, I started playing with my left hand only. I realized that my left hand played at lower frequencies; the latter are beneficial to the canine nervous system.

Are you saying that all this is scientifically backed?

It’s all based on research. There's been about 10 case studies since I started in 2003. I study the research and I amend my recordings accordingly. I’ve updated my music in recent years and re -recorded the changes..

How can dog owners use music to calm their dogs?

I would like to invite readers to take one small step to make their sound environment more dog friendly. Take a sound survey while you cuddle with your dog on the sofa. Sit and just listen to the sounds. And then, non-judgmentally, make a note of a motorcycle or construction sounds, barking dogs outside, as well as indoor sounds related to appliances, electronics that come with their own set of Bluetooth humming.

A sensory test will allow you to attenuate your sound environment. Make a checkmark next to anything you can control, diminish or delete.There are many appliances and electronic devices we can control. We can turn off notifications, modernize our washing machines and dryers to turn-off-buzzing. Every year, our use of technology increases.Bombarded by electronic sounds, we become immune to them. Reducing or deleting them can not only help your sound sensitive dog, it can be used as a preventive method to preserve your own nervous system. Some dogs, as well as people, develop  electronic related sensitivities and anxiety issues in middle age that they were immune to in their younger years.