Care For Your Body And The Planet With Quinola 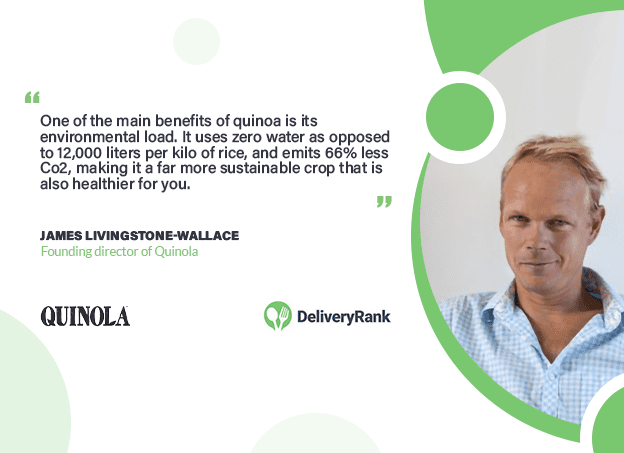 Quinola is a fairtrade provider of ready-to-eat quinoa pouches, kids' meals, dried grains, and healthy snacks. In this interview, founder James Livingstone-Wallace shares his journey into building a fair trade business and his views on supply chain ethics.

What led you to start Quinola?

I'm James. I'm the founder of Quinola. I started the company 10 years ago. I spent the first 15 of my career being a fund manager, investing in European equities on behalf of pension funds and institutional investors. That was a great time, I really enjoyed learning and meeting lots of companies.

Then, the financial crisis came along, and there was a voluntary redundancy program, and I decided to give it a go, so I took my three children out of school, and with my wife, we went off traveling for a year.

It was up in the Altiplano of Peru that we came across quinoa for the first time. I'd never heard of it before. We tasted it and it was pretty good, relative to the overcooked pasta and rice they have in soups. I found it to be a really interesting product, so I did a bit of research and realized the crazy nutritional benefits. So the choice of the product was made, and that was the start of the company.

It was a fairly basic market research. We wanted to get a product that isn't coffee, chocolate, or tea, that we can launch a fair trade business with. We went to see various cooperatives in Bolivia and Peru and we came across this lovely little cooperative up in the mountains near Lake Titicaca. We went to the farmers and asked if they would be interested in getting certified Fairtrade. We helped them through that process and that's how it all started.

What can you tell us about Quinola’s product line?

We started with basic white, red, and black quinoa, which are probably the three main varieties of quinoa.

I was doing tastings in places like Selfridges in London Oxford Street, where we got our first listings. We had a lot of feedback from people saying they would get it if it was made in the ready-to-heat-and-eat format, so we created our microwave pouches.

We now have a range of nine different pouches of precooked quinoa which are very useful because you can't get it wrong. It’s a really practical, time-saving solution.

We launched a baby range where quinoa replaced animal protein in a complete meal for babies. They were really amazing meals, super simple, and tasted great, but commercially we struggled because pediatricians are always telling parents that they should give their babies meat, egg, or fish and that without it, it’s not a complete meal. I think it was a bit ahead of its time.

So we launched some kids' meals, porridge flakes, crackers for healthy snacking, and lots of interesting products that you can make with quinoa.

What are Quinola’s core values?

Quinola was initially a fair trade business. We've stretched now to a wider mission in terms of making eating right easy and that revolves around four core values.

One is that we want it to taste good. It's important, and people forget that. I think there are a lot of products on the shelf that might be super healthy but aren't that amazing in terms of taste.

We also want it to be simple. In terms of food labeling, we have Nutriscore on the front of our pack that helps consumers identify what’s inside in a very simple ABCDE format. We want it to be as easy as traffic lights, with simple nutritional indicators that anyone can understand.

In Western Europe, we're now up at about 20-26% obesity rates. A quarter of the population is clinically obese. Why? Because they're eating crappy food that is causing type two diabetes. COVID doesn't even rank next to how many people are suffering from a purely preventable disease, or created by overly processed unhealthy food that people are buying.

We're also very concerned about the environment and the ethics of the supply chain. I'm sure you're aware of what minimum wage is. If you're a salaried employee, you can't be paid less than a certain amount of money per hour, which varies from one country to another.

What does it mean to be a fair trade business?

The Grapes of Wrath, a great book by Steinbeck, describes the whole process of price unionization. When Steinbeck was migrating to California, people were not even being paid enough money to be able to live.

The fair trade movement is saying that you have to pay people this much as a minimum. But if you're a smallholder with a tiny farm, what is your wage? You don't have a salary, you're self-employed, you're a farmer, and what your wages are is how much you sell your produce for.

You can't just pay people nothing. Supply and demand should not be how you numerate humans, because there has to be a level of human dignity.

But in produce markets, it's all about supply and demand. If suddenly, there's a lot of supply, the price goes down, and you can't live off your product anymore. That just doesn't strike me as reasonable.

If you're buying a bar of chocolate for $3, why on earth should the guy growing the cocoa not be able to live off the cocoa that's going into it? There's no reason. So I think fair trade is about us saying we have to pay people fairly.

So, they set a minimum price, which is a bit like the minimum wage for crops that smallholder farmers can live off. When you're earning the minimum wage, there are no luxuries, it really is borderline living, and the minimum product price is about the same thing.

The minimum price is just ensuring that they can put food on their table, send their children to school, and if they have electricity, they can pay their electricity bill. I think these are really important basic human rights, and that's what fair trade is.

But even with fair trade, agriculture is still a risky business, because the yields aren't constant. A hailstorm or a drought at the wrong time can knock out 10% of your crop.

Fairtrade gives entrepreneurs that safety net so they can produce crops for their own consumption as well as for their income. They eat about half of what they grow and sell the other half. We’re just making sure they get to sell it at a fair price.

So what are the main benefits of quinoa?

One of the main benefits of quinoa is its environmental load. Quinoa is a non irrigated crop so obviously, there are some serious benefits around freshwater usage. It uses zero water versus 12,000 liters per kilo for rice, which is a massive advantage.

Since rice fields are constantly being flooded, there's a lot of rotting organic material in there which creates co2 emissions. Quinoa will have a 60% lower carbon footprint, which is why the UN declared 2013 as the year of quinoa.

Back in the 1970s, NASA was looking at nutrition sources for astronauts on Mars. Obviously, you can't have tons and tons of food on a spacecraft, so they did planetary wide research and their conclusion was that there is no such thing as a perfect food for man in either the vegetable or animal kingdom, but the closest thing that comes to perfection would be Quinoa.

Quinoa has pretty much all the nutrients you need. It's a complete protein, similar to meat protein, and pretty much the same protein you get in milk. It has lots of fiber, which most people are deficient in the western world. Unlike white rice which contains fast-release sugars that spike blood sugar levels, quinoa has slow-releasing complex sugars, which means you can have the same amount of calories as rice, without gaining the extra weight.

Do you think quinoa could one day replace rice, wheat, or other common grains?

It would definitely be a far better alternative but changing people's eating habits takes a long time. When I launched into this space, nobody had ever heard of quinoa and none of my friends had ever tried it. Obviously, it has become a lot more popular since then.

We currently have about 10-12% household penetration in the Western world. About one in 10 people buy it once or twice a year in a supermarket. So we still have a way to go but hopefully, it'll become more and more popular because diversity is good.

About six crops make up 80% of human calories. Rice accounts for about 20% of the calories humans consume, and there are only two or three main varieties that are grown, whereas quinoa has thousands of varieties.

In terms of biological protection, it’s really important that we diversify the crops we rely on. If a crop disease suddenly wipes out 5% of human calories, that's a pretty dangerous place to be. And that's where we are.

Where can people get your products?

It depends on which country they are in. We have our products in multiple countries, mostly in Europe, but we do have some initial listings at Costco in the US.

Our website, quinola.com, is probably the best place to find where you can buy our products, depending on the country you're in. You can also buy our products on Amazon.

By September of this year, we’ll be launching a direct-to-consumer eCommerce site, which initially will only be for UK consumers, and gradually grow to serve a wider audience in other geographies.

We're trying to make eating right easy. When you see a pack of quinoa on the shelf, whatever brand it might be, you can be pretty confident it tastes good and that it's good for you, but more importantly, it's also good for the planet. We also ensure it's good for the people who make it. There aren’t very many products on a shelf that can offer that promise, but we do.

Ditsa Keren
PR Writer, Delivery Rank
Ditsa is a tech blogger and entrepreneur with a passion for innovative solutions that eliminate food waste and increase food security.
Our Top Choice For 2023
Up to $276 Off!
Skip Weeks Or Cancel Anytime + Free Shipping
Claim Discount
X
REVIEWS