Seoulbox Snack Box 2023 Get The Best Of Korean Pop Culture

Seoulbox distributes thoughtfully curated Korean snack and lifestyle boxes to Korean culture-lovers all over the world. In this interview, co-founder and CEO Suji Sohn discusses her entrepreneurial journey and unveils the brilliant branding behind Seoulbox. 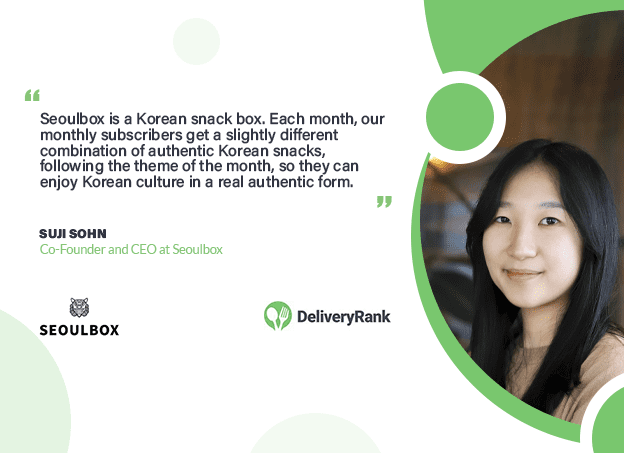 What inspired Seoulbox, and how has it evolved so far?

I was brought up in Korea. At the age of 18, I dropped out of college because I wanted to learn more about other cultures. I went to study in London and found that a lot of my classmates who had British backgrounds were really into Korean culture and K-pop. That said, there weren’t many ways to experience Korean culture at that time.

I met my co-founder and we decided to bridge this gap. We started with a miniature box of authentic Korean snacks that we listed on eBay and it sold really well, so we set up the subscription model to allow for more meaningful relationships with people who love Korea.

Now, we’re a global distributor of Korean culture. We promote Seoulbox through our website, Seoulbox.com, where we release our subscription service.

Seoulbox is an authentic Korean snack box. We source lots of different snacks, following our theme of the month. For example, our current box is Winter Snacks, which includes snacks which are typically considered as winter snacks in Korea, such as roasted sweet potato candies, fishcake tea and Kimchi energy drink. So each month, our subscribers get a slightly different combination of snacks.

Similar to other subscriptions, we pick a theme and we express it in a snack format, such as Korean love (in February), Korean holidays, or Korean Christmas. Some Korean snacks aren’t vegetarian, so we built a special box with only vegetarian options.

To give a rich experience of Korean culture, we want to go beyond snacks, so we throw in some popular beauty items or the famous K-pop merch. K-pop is a general name for Korean pop music. It’s become very popular since 2000. Although it’s similar to American or British pop, K-pop is a genre of its own. The most famous K-pop artists so far are probably BTS.

We now have a lifestyle box called Seoulbox Life, where we include Korean-themed lifestyle items. Our current theme is Korea's Jeju Island, so we have a lot of beach items like water bottles, blankets, etc.

Essentially, we want to express Korean culture in the most authentic way possible.

Here’s a preview of Seoulbox unpacking:

Where do you sell the most Seoulboxes?

We started by word of mouth through eBay and Amazon and slowly built up as we went along. Our initial target market was university students who joined Korean or Japanese culture University Societies. We started by contacting these university societies to ask if they were interested in a Korean snack box. We gave them some coupons and we started to grow from there. Right now, we’re branching into broader marketing like Facebook. Social media is our biggest marketing tool because that's how we authentically communicate with our customers.

Our biggest markets are North America, Western Europe, and the UK, which was initially the biggest because it’s where we started. After we came back to Korea to expand our warehouse, we started to focus more on the United States and especially the East Coast, because a lot of people there are interested in Korean culture. We make Korean items easily accessible for them.

What are your plans for the future?

We want to develop as a brand and build strong relationships with our customers. It may not be that we reach mass marketing because our customers are very unique. People who love Korean culture are kind of a subculture of their own, regardless of the country or culture they come from. We aim to build a strong subculture with our subscribers, so they can enjoy Korean culture in a real, authentic form.

We want our customers to be proud of themselves. A lot of our younger customers who are more subject to peer pressure might feel like being a fan of South Korean culture is something that they want to hide because they feel different from others. We try to express that by loving Korean culture and sharing it with your community, you become more in tune with yourself, and ultimately you become happier. We want to help this journey of finding what they love and spreading Korean love to the world.