Ujwala Chintala, Founder and CEO of The Laddu House, is a software engineer, Founder and President of the Stray Animal Foundation of India, and a dedicated mother. She tells us about her motivations behind The Laddu House, which stem from a passion for experimenting with traditional recipes and a deep-seated desire to help animals in need.

Where were you born and what was the reason behind you or your family immigrating to America?

I was born in a very small town called Mahabubabad in the Southern state of Telangana, India. I left India when I was 23 and immigrated to the United States with my husband who was offered employment there. I was only granted a work permit after three years of being there so during that time, even though I already had a Master’s degree from India, I studied and gained the equivalent diplomas in the American system.

Now that you’ve been in the US for so long, which parts of your culture do you still identify with the most?

I’ve been in the States for twenty years now and in certain ways, I identify as American. However, when it comes to food, I am 100% Indian! I love everything about Indian cuisine. Even my two children – who were born and raised here in America and would never dream of moving to India – love our food.

What are laddus and how do yours differ from others on the market?

Laddus are (usually) sphere-shaped sweets originating from the Indian subcontinent. They are traditionally made from gram flour or semolina, fat, and sugar – other ingredients can be added too, such as nuts or dried fruits.

This is where my laddus differ from others on the market. I’ve enhanced the traditional Indian sweet recipes that have been passed down from generation to generation with modern flavor twists. I also use high-quality ingredients that are nutritionally beneficial and have all been made from scratch. 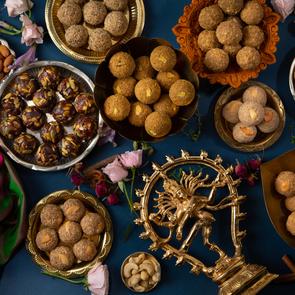 What’s the shelf-life of your products?

I am very conservative when I date my products and work on the basis of a three-month shelf life. However, if they are stored in a cool place and are exposed to zero humidity, they remain in perfect condition for six months because of the quality of ingredients used.

Ujwala, you’re also a software engineer. How did this major professional shift transpire?

Actually, I still work in IT on a full-time basis. The Laddu House is my part-time job and the whole reason behind starting The Laddu House was to help animals. I had been involved in animal rescue for several years and I really wanted to see what more I could do to raise funds.

This was why three years ago, I started selling my laddus during Diwali (one of the major festivals celebrated by Hindus). It was customary for me to make them for family and friends but I decided to sell them to a wider circle of people, hoping to raise funds for animals in need.

I received rave reviews and this is how I came to start the business. However, leaving my full-time job is not an option, as I still need to support my family.

Could you tell us more about how your animal welfare projects and The Laddu House work together?

I’m the Founder and President of the Stray Animal Foundation of India, which is a registered non-profit organization based in Florida. I work with shelters and independent rescue services in India involving mainly cats, dogs, cows, buffalos, and bulls. This has always been my priority and is the very reason I started The Laddu House.

In fact, fifty percent of profits from The Laddu House are donated to this cause.

My network is growing slowly but surely. It’s sometimes difficult to gain the trust of these organizations as I’m so far away and I don’t actually get to see the work they do first-hand. I have to monitor each rescue case closely and check on the progress being made. Despite the distance, it has been extraordinarily successful and I’ve been able to connect with genuine animal lovers in India.

Most people don’t know that 90% of the world's leather comes from China or India. You can imagine the number of cows slaughtered for leather production and to what lengths poverty-stricken people are capable of going to put food on the table. There are also different animal welfare laws in India, which makes it cheaper and easier for international firms to navigate.

While there is supposedly respect for cows in Hindu culture, dairy cows at the end of their cycle that are not slaughtered are “set free” into the urban jungle, where there’s not a blade of grass to be seen. This is just as cruel as killing them in an inhumane fashion. The Stray Animal Foundation helps save animals like these.

You have a history of gestational diabetes, did this influence your laddu recipe?

I started making my own laddus as I was a diabetic and would often crave sweet things. They’re not really diabetic-friendly but my laddus do contain better sugars than those found in other Indian sweets. I work with healthy ingredients such as whole grains, fresh nuts, and fresh lentil flour.

Most importantly, I use fresh, homemade pure ghee (a form of clarified butter), which adds to their nutritional value. I make everything from scratch and only use unrefined sugar. So, although not diabetic friendly, they are far healthier than any other Indian (and perhaps Western) desserts available on the market.

You describe your products as artisan Ayurveda-inspired sweets. What does this mean?

I base my recipes on Ayurvedic methods. Ayurveda is considered to be the oldest healing science. In Sanskrit, Ayurveda means, “The Science of Life.” Ayurvedic knowledge originated in India more than 5,000 years ago and is often called the “Mother of All Healing.”

Firstly, I process all my ingredients as minimally as possible. Everything is roasted at low temperatures, which allows the enzymes, amino acids, and nutrients to remain in their original state.

I intended to make my laddus with jaggery, which is a raw form of sugar, but it’s very hard to come by. Most jaggery available on the market these days contains some kind of chemical component, which is usually undisclosed. The next best thing to jaggery is brown sugar.

Nothing has been scientifically proven but, according to Ayurveda, the ingredients I use contain healing properties and the manufacturing process follows Ayurvedic methods. Most importantly, the laddus are simply delicious, which sometimes is the best medicine of all! 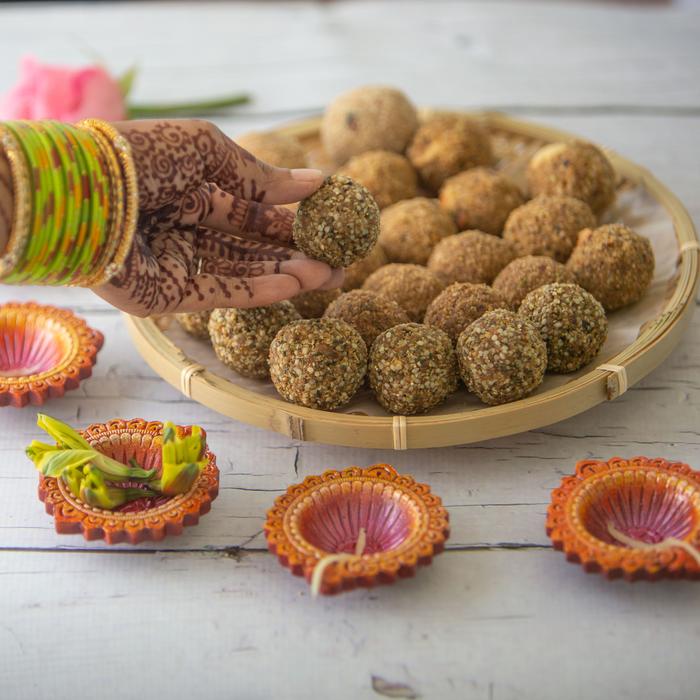 Do you offer a subscription service?

What percentage of your clientele is of Indian origin?

The majority of our customers that come through the website are of Indian origin – as many as 85 to 90%. Same goes with our monthly subscription platform - only about 10 to 15% of customers are non-Indian.

If we consider both, I’d say around 75% of my customers are Indians who tend to order regularly, whereas the non-Indian customers will order only once in a while. Diwali is our busiest time of year, which perhaps suggests that the proof is in the pudding!

Are laddus traditionally for celebrations or can they be eaten as everyday nibbles?

Laddus are traditionally part of a large spread at weddings and festivals or used as gifts during these times. However, they’re also eaten pretty much every day on a much smaller scale.

What lies in store for The Laddu House?

I’m currently looking for an active partner to help grow the business as I simply do not have the time to do it on my own. As I mentioned earlier, leaving my full-time job is not an option and my primary motivation for growth is to raise more funds for animal rescue. Finding the right partner will take time, though.

Meanwhile, I’m excited to be providing Americans with this opportunity to experience one of India’s most popular delicacies, and I hope that we’ll continue to see growth in our mainstream American clientele.