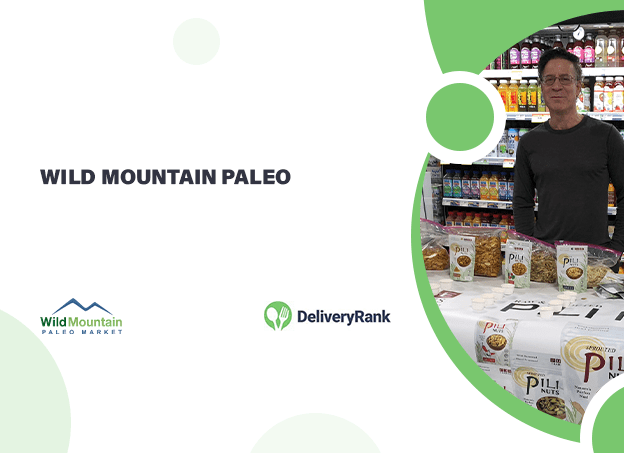 How did you come up with the idea of Wild Mountain Paleo?

I came across the Paleo lifestyle practically by chance, when a friend asked me to assist him in developing an almond flour based pizza crust. I was very intrigued by my friend’s request and he told me about the Paleo diet.

Shortly thereafter, I read a fantastic book on the subject, “Primal Body, Primal Mind”, written by Nora Gedgaudas. I became enthralled and upon further investigation, the Paleo concept made sense to me. Thus began my Paleo journey.

I had spent the previous 20 years on various health programs; first becoming vegetarian and then vegan, and later moving on to food combining, raw food and at times an all fruitarian diet.

For various health reasons, I was no stranger to diet fads, whose benefits I evaluated after experience. But nothing had prepared me for the dramatic, immediate positive impact of going Paleo.

After just two weeks I knew that I had tapped into something fundamental and powerful. It was clear that this was no fad because feeling so energetic and together precluded any thoughts of going back to a “conventional wisdom” based health program. And I’m sure that many people who visit our store have had a similar experience.

Incidentally, Nora Gedgaudas, lived in my hometown of Portland, Oregon so we met shortly after. Nora prescribed testing for gluten intolerance and general food allergies, even though I didn’t manifest any of the typical outward symptoms. Much to my surprise, the test results showed that I was extremely sensitive to gluten, coffee, casein (the protein in milk) and just about all grains. About the only thing I passed was dark chocolate.

Although I wasn’t thrilled to discover the severity of my sensitivities, I appreciated knowing about them. Using this information, I further modified my diet, achieving even better health results over time.

I pursued my interest in the field, which led me to the concept of opening an online store. To me, this was a big missing piece in the practical implementation of the Paleo transformation. I took a course and was certified as a Certified Healing Foods Specialist (with a strong foundation in cultured foods), and used my past experience and knowledge to develop our ingredients policy and choice of products for our store.

In my opinion, Paleo is the ultimate health plan and the most suitable for the human body. I am happy to continue deepening my knowledge and sharing it with the public I serve. I strive to make Wild Mountain Paleo Market the optimum real food store.

Could you give us some background about how this company was launched?

After spending  8 years in my specialty field of electrical engineering, I switched to database design and developed some of the very first ecommerce web catalogs just as the Internet was starting to get popular in 1996. In 2010, when I decided to start my own ecommerce business, I was able to build our website and management tools from scratch with these same tools I had previously developed, funding it from my own savings. I began working in late 2011 and launched the site in Sep 2012.

Are your recipes based on tradition or do you innovate and experiment with different ingredients?

The Paleo Diet is very strict and our products must meet those requirements. Within those limits, we do try to innovate and experiment to come up with the most delicious Paleo foods without bending the ingredient rules.

But I must say, there are two parts to our operation. The first is Wild Mountain Paleo Market, which was initially an online only grocery store that carried existing brands and did not produce any food products.

That changed in 2015 when we launched our own food brand, Pure Traditions. So, I will answer your question in the context of Pure Traditions. While we do sell Pure Traditions products on our Wild Mountain site, the brand also has its own website and is sold online in places like Amazon.com, Walmart.com, as well as wholesale in brick and mortar stores such as Natural Grocers.

Which flavors are the most popular among your customers?

Do you work mostly with individual customers or businesses?

The majority of our sales are to retail customers; we also sell a fair amount to wholesale and private businesses. We’ve worked on several verticals, including the operation of an off-site retail store, which was an awesome experience but not cost effective. I know about the importance of focusing on one area of activity to succeed, but on the other hand, I refuse to ignore the spontaneity of a journey and I remain open to new ideas and alternative paths.  As it turns out, we’re now going to be able to open a retail store as part of our new facility in early 2023.

What is one thing that helped you in your entrepreneurial journey that you would do over and over again?

One of the most important realizations was to offer new products that we develop at competitive market prices right from the start, rather than wanting to immediately make money while waiting for normal profit margins that come with higher scale. Otherwise we could have priced ourselves out of the market right from the start, without ever giving the product a chance.

Is there anything else you would like to add or highlight, some anecdote or story to share with our readers?

I know old habits die hard. One aspect of the Paleo diet is that it’s very strict on carb consumption, so it can be a challenge for noodle and pasta lovers. I would like to introduce our Keto Coconut Noodles. These noodles contain only 2 carbs per 140 gm serving. They are produced from non-GMO coconut water from Thailand. They have a mild taste that can be blended with any Asian and even Italian recipe. Their texture is similar to glass noodles.

In addition, they are ready to eat and require no rinsing or draining. They can just be added to a pasta sauce, soup, curry or stir fried recipe. We have a couple of other low carb noodle tricks up our sleeve coming in 2023, so stay tuned.

Ditsa Keren
PR Writer, Delivery Rank
Ditsa is a tech blogger and entrepreneur with a passion for innovative solutions that eliminate food waste and increase food security.
Our Top Pick for December